The difference between plancha and griddle

What is a plancha & what is a griddle?

We’ve all heard of the good old-fashioned grill or griddle pan which can fry and grill up a storm! What are the latest and best innovations, though? Nowadays, plancha grills and plancha griddles are popular in both professional and domestic settings. Of course, modern electric and gas versions of plancha and griddle models are available now instead of using open flames. But what are the essential differences and similarities between these two hot plates? Grill vs griddle… If you want to know what is a plancha and what’s a griddle, let’s explore those differences and similarities now. 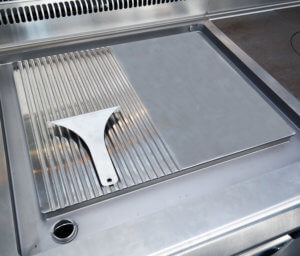 Differentiating between plancha and griddle

The environment and user can determine the equipment terminology. The difference between a grill and a griddle is that a plancha electric grill is usually used at home, while a plancha griddle is more commonly found in professional kitchens. A plancha grill is perfect for outside cooking. Built-in planchas are employed for outdoor kitchens or mobile gas versions on carts for the yard, terrace or garden. Nowadays, however, the commercial plancha grill has also become a trend in restaurants. In France and abroad, the term “plancha” is more common than griddle. You will often see restaurant menus with menu items such as “Grilled Chicken a la plancha”.

Origin and definition of the plancha

The Spanish term ‘plancha’ translates to “cooking plate”. Planchas were usually constructed from cast iron. During the 19th century in Southern America and Spain, the plancha was especially popular. It was mostly taken out during pilgrimages and religious ceremonies; used as a massive cooking plate placed on the fire to prepare various meals in mass quantities. Then, from around 2000 onwards, the advent of the plancha’s influence crossed borders, and the appliance established itself in the southwest of France and across Europe.

What is a plancha grill?

A plancha grill is a flattop grill that resembles a griddle, but performs relatively differently due to differences in the heat source. The commercial plancha grill is engineered with extreme temperature directly concentrated over the heat source with a deliberate gradual decline towards the edges, making it perfect for searing and caramelisation. A Plancha cooking equipment can cook up thin steaks, chicken, seafood, vegetables and much more.

The plancha grill has been earning its reputation as an alternative to home barbecues, and steadily replacing grills that come into direct contact with the flames. In addition, cooking on a electric plancha is much healthier, since the food never has direct contact with the heat source, and a negligible amount of oil or grease is needed. With a traditional barbecue grill, preparing and waiting for the fire to be ready is a lengthy process. Cleaning a grill is also notoriously difficult and tedious. Alternatively, with a plancha, you prepare your whole meal on the BBQ plancha plate through contact cooking. Your meal is prepared quickly and effortlessly, while enjoying the company of family and friends.

Origin and definition of the griddle

The term ‘griddle’ hails from Latin, old French and English, meaning crate, grate and grill. The griddle is a flat shallow cooktop which made its appearance as early as 104 A.D. in Rome. Originally made from brick, stone or clay slabs placed on the fire, griddles have historically been used for cooking in practically all cultures. The griddle has grown in acclaim, and is now an essential cooking device amongst professionals in the catering sector. A griddle will often be installed into standard worktops and cooking suites in restaurants and food trucks.

What is a griddle?

The griddle has a large-sized cooking plate which works well for intensive cooking at high temperatures. Griddles are equipped with a few independent cooking areas or zones. They also require very little grease and no contact with open flames, resulting in healthier food results. Griddles are useful for grilling meats, searing fish, sautéing vegetables, frying up eggs, baking pancakes and more.

Both pieces of equipment operate similarly in terms of contact cooking. Food products cook better and adhere to a cooking plate the smoother the surface is, and both appliances are characterised by their ultra-smooth cooking plates which conduct at particularly high temperatures. These devices are sturdy and heat up rapidly, and chefs require their browning Maillard effect. Their temperature transfer and conduction heating are extremely efficient. Plus, they require just a drizzle of olive oil on a hot and smooth plate.

Another advantage is you have varied cuisine choices which you can cook up simultaneously with plancha cooking or with griddle cooking. You can also vary the type of cooking – sear, grill, fry, simmer, deglaze, reheat, etc. It is also possible to cook using steam with a cover on the cooking plate. With the electric and gas models, the heating power regulation allows for ongoing cooking sessions with no downtime, thus producing high yields. They are a valuable investment for any catering company, restaurant, takeaway business, as well as for residential use.

Both the griddle and plancha require similar servicing routines. Their smooth surface makes for simple maintenance, and the collecting tray permits easy cleaning. Depending on the finish and thickness, the cooking plate must be degreased, and then cleaned with a spatula, sponge, and a little dishwashing liquid. Regular cleaning of the devices will ensure their top performance.

Check out Capic’s extensive range of high-performance and resistant cooking equipment, and pick out the appliances which best suit your specific requirements!