Bain-Marie: why and when choosing this cooking method?

A bain-marie is similar to a traditional water bath or double boiler. First, you place water in one container and heat it; then, you put a smaller container inside the first one. Doing this creates a heated bath that you can use to cook food gently and keep it warm.

Nowadays, the term has come to refer to the type of pan used; a modern bain-marie can also be used to keep cold food chilled. In this scenario, the hot water container is replaced by an ice pack or cooling unit.

Bain-Maries come in an infinite range of shapes and sizes. Those for professional use are generally round with a cylindrical shape and are made of stainless steel. This material is an excellent conductor of heat and is easy to clean.

Applications of a bain-marie

Even if you aren’t in the catering and hospitality industry, you have probably seen a bain-marie. They are widely used in restaurants and have many different applications. Today, a bain-marie is most often used for maintaining food or ingredients at the correct temperature. For example, you might see a bain-marie on a salad bar used to keep items such as salad dressing cool. The container is placed on ice or in a cooling unit to keep the food fresh.

How is a bain-marie used in cooking?

A bain-marie is often used for cooking custards and other delicate foods that are liable to crack with dry heat. 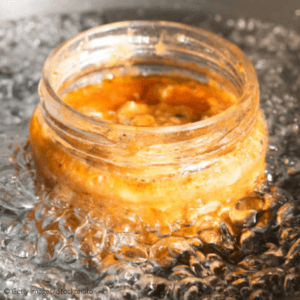 The intriguing history of the term “Bain Marie”

Bain-marie means Mary’s bath in English. But who was this Mary?

The Mary in question was an alchemist who lived at some time between the first and third centuries CE. She was also known as “Mary the Prophetess”. While none of her writing survives, we learn about her work from others who refer to her ideas.

Her name survives in her invention. The first written mention of a bain-marie is a reference in Latin to a balneum Mariae, a phrase which translates as Mary’s bath. The Latin term later became the French bain-marie. And this technique of using hot water in one container surrounding another pot or pan is still in use today!

While the balneum Mariae probably looked more like scientific equipment than something we see in a modern kitchen, the principle is still the same. It is not often that we can trace the origins of a technique such as this back to the days of the Roman empire. And it is perhaps even more astonishing that Mary’s name lives on in a humble item of kitchenware!